A recent study from the Health and Social Care Information Centre (a government body), showed a dramatic rise in Crohn's related annual hospital admission rates for 16-29 year olds. Although some of the increase may be related to changes in how the data is recorded, the results may also reflect a true increase in admission rates in young adults with Crohn's disease. The results were widely reported in the media including the BBC and the Telegraph newspaper.

The data covers the period 2003 - 2013 shows a steady and progressive increase in documented hospital admissions for young patients with Crohn’s disease. In fact, between 2003 and 2013, the annual admission rate increased by almost 400%.

The study did not examine the reasons for this change in practice. At first glance, the data might appear to suggest that the incidence of Crohn’s disease is increasing. However, a number of other factors may also influence these results. Specifically, improvements in diagnosis and the documentation/recording of the diagnosis for statistics purposes may have had an impact the results. In addition, in the middle of the study period (2006-2007), patients who admitted to the independent sector were also included in the results, which will also have resulted in an apparent increase in hospital admissions. 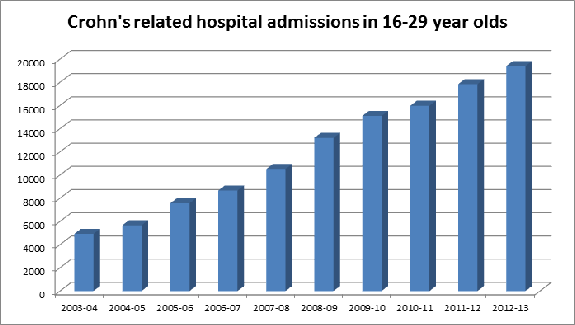 Although it is very likely that changes and improvements in the documentation and recording of the diagnosis will account for much of the so-called increase in admissions over the last 10 years, it seems likely that there has also been a real increase in either the number of young patients diagnosed with Crohn’s disease or alternatively, an increase in the young patients with Crohn’s disease who require hospital admission. This of course begs the question as to what might be causing such a change if indeed it is real?.

Crohn’s disease can be caused by a number of conditions (these are discussed in more detail on our dedicated web page for Crohn’s disease or on Crohn’s information sheet). However, it is generally felt that the disease is multi-factorial. This means that it is unusual that any single trigger will cause the condition to develop. It’s more likely that several different factors come together to trigger the condition. The most common factors include

Where can I get more information about Crohn’s disease or ulcerative colitis?

A UK  patient orientated organisation. Provides useful information for patients with Crohn’s and colitis. Organisation had local branches and is also involved in fundraising

A UK charity providing support, funding raising for research and information for patients who have had their colon removed and have either an ileostomy or ileoanal pouch