What is bowel screening and how do I do the test?

Although bowel cancer is common, it is also highly treatable if detected early. If bowel cancer if found in it’s early stages, there’s more than a 90% chance of successful treatment. The sooner it’s caught, the easier it is to treat.

The NHS Bowel Screening Programme invites all men and women aged 50–74 to participate. Bowel screening involves taking a simple FIT (faecal immunochemical test) test home every two years. The FIT test detects microscopic traces of blood hidden in small samples of faeces (poo). You complete the test in the privacy of your own home. Once complete, you simply return it in the post to a central laboratory for testing using the pre-paid envelope supplied with your your kit. 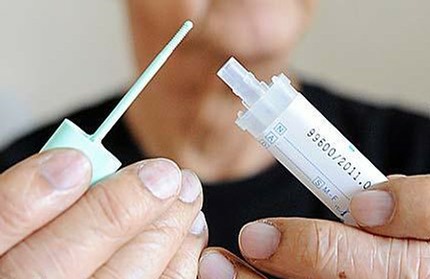 The older guaiac test required 3 samples. However, the newer more sensitive FIT test requires just a single sample. This newer test is also more specific for blood coming form the colon and therefore gives rise to less false positive results that might have previously occurred due to bleeding form the mouth or gums. This is now the standard test used in the screening programme throughout Scotland. The English Bowel screening programme are currently rolling out the new FIT test.

A positive FIT test does not diagnose bowel cancer, but will identify blood in the faeces. A positive test will trigger an invitation to have a colonoscopy to investigate what is causing the bleeding.

Bowel screening was gradually introduced across England, Wales and Scotland from 2006 in a rolling programme which now covers the whole of mainland UK. It aims to detect polyps and other changes in the bowel that might develop into bowel cancer in the future. It can detect bowel cancer at a much earlier stage, before people are experiencing any obvious symptoms. This is very important, because bowel cancer is usually a very slow growing disease, and can be cured with a straightforward operation if it is detected before it has started to spread. Benign (harmless) polyps can also be removed quickly and easily in a simple procedure called a polypectomy that will significantly reduce the risk of bowel cancer developing later.

What is meant by screening?

Screening is a public health service which aims to try and identify and treat a disease, cancer or pre-cancerous condition at an early stage. By starting early treatment, it is often possible to cure the disease or prevent a cancer developing. Screening which is not compulsory, is  usually only offered to those most likely to benefit from screening e.g. breast screening is offered only to women of a certain age.

Why is screening important?

Screening can find serious conditions early, before any symptoms have developed. The earlier the condition is found, the better chance of dealing with it. If a condition is found early, it is less likely to become severe and often, the treatment is less invasive compared to the treatment that may be necessary when the condition is more advanced e.g. many pre-cancerous bowel polyps can be removed by a relatively simple procedure called a polypectomy. This can be carried out as soon as they are identified during a colonoscopy. However, if left alone, some polyps can turn cancerous and surgery (with removal of part of the bowel) may be necessary to get rid of a bowel cancer.  Regular screening can reduce the number of deaths from particular conditions.

What is the Bowel Scope test?

The Department of Health in England launched a pilot programme for a new, additional, one-off bowel screening test in March 2013, the bowel scope (flexible sigmoidoscopy). In Scotland, the Bowel Scope Test was introduced in June 2014. The new test which has been labelled the “Bowel Scope Test” will initially be offered in Scotland to around 20,000 patients in Tayside, Fife, Grampian and Greater Glasgow and Clyde NHS board areas. If it is successful in these areas is will be rolled out across the country.

Why should I take part in the Bowel Screening Programme?

Around one in 25 people in the UK will develop bowel cancer - men and women of all ages, cultures and backgrounds. It is the third most common cancer and the second biggest cause of cancer deaths. Bowel cancer screening has been shown to reduce the risk of dying from bowel cancer by 16 per cent.

When will I be asked to take part in the Bowel Screening Programme?

If you are in the target age group, an invitation letter will be sent to you, followed 2 weeks later by a screening test kit. Your screening programme will start within a few weeks of your 50th birthday if you live in Scotland and your 60th birthday if you live in the rest of the UK. A repeat invitation and test will occur automatically every two years until your 75th birthday. The pack comes with full instructions on how to complete the test in the privacy of your own home.

Over a period of several days, you will need to collect very small samples of your faeces (poo) on a special test card, after you use the toilet. This card is then posted back to a laboratory, where a chemical is added to the samples on the card to check for blood.

Around 2 in 100 people will have an 'abnormal result' and will be offered an appointment with a specialist screening practitioner at a local bowel screening centre to discuss having a colonoscopy. Alternatively, you may be offered a telephone consultation to discuss colonoscopy, which is a a more detailed examination of your bowel.

Bowel cancer screening identifies bowel polyps and bowel cancer early, before any symptoms have developed. Early identification and removal of bowel polyps reduces the risk of developing cancer. If bowel cancer is found early enough, there’s more than a 90% chance of successful treatment.

The Scottish Bowel Screening Programme invites all men and women aged 50–74 to participate by taking a simple FIT bowel screening test at home every two years.

Can I use my private health insurance to undergo a screening colonoscopy?

Although most insurance companies do not support “screening tests”, in general, if a positive FIT result is obtained, they will support investigations such as colonoscopy.

Can I have a Private Health colonoscopy at the Glasgow Colorectal Centre?

Are there differences in the Bowel Screening Programmes throughout the UK?

England, Wales, Scotland and Ireland each have a slightly different strategy for bowel cancer screening:

The Scottish Bowel Screening Programme is offered every two years to everyone (registered with a GP) in Scotland between the ages of 50 to 74.  The programme should start within a few days of your 50th birthday and continue automatically, provided you are registered with a GP practice and they have an accurate record of your home address. If you are within the screening age range and have not yet received your first test kit, please contact the national helpline to request one.

More information on the Scottish Bowel Screening programme is available from www.bowelscreening.scot.nhs.uk

The NHS Bowel Cancer Screening Programme is offered every two years to everyone (registered with a GP) in England aged 60 to 74. People over 75 can request a screening kit by calling the freephone helpline below. The organisation for sending out of testing kits works in exactly the same way as the programme for Scotland.

More information on the English Bowel Screening programme is available from www.cancerscreening.nhs.uk

The Bowel Screening Wales programme is offered every two years to everyone (registered with a GP) in Wales aged 60 to 74. The organisation of sending out testing kits works in exactly the same way as the programme for England.

More information is available from www.wales.nhs.uk/bsw

The Northern Ireland Bowel Cancer Screening Programme offers screening every two years to all men and women aged 60 to 71. After your first screening test you will be sent another invitation and screening kit every two years for as long as you remain within the screening age group.

Full information on the programme is available at www.cancerscreening.hscni.net

If I'm not eligible for the NHS Bowel Screening Programme, can I have the test done privately?

Screening ages are set to reflect the fact that bowel cancer occurs most commonly in people over the age of 60, and it is usually a slow growing disease. If you have symptoms, you should see your GP. If you are concerned about bowel cancer but not experiencing symptoms and don't qualify for the screening programme, you could order a screening kit online from several, reputable private laboratories. Testing kits are also available from some pharmacies. The self-test kits you buy over the counter from pharmacies may vary in quality, so the results could be misleading. You will be supplied with a FIT kit, a return mailer envelope and full instructions. Samples are analysed in a dedicated laboratory and the results are returned to you within 10 days.

If you are thinking about paying for a private screening test, or your health insurance company offers you a test, ask the company what care or support they offer after you get the test results. They should also tell you how accurate their test is. If the results aren’t clear or if blood is found in your sample, you will either need to visit your GP or get a referral for a colonoscopy.

If the private test gave a positive or unclear result, you would then have to consult your GP. At the Glasgow Colorectal Centre, Richard Molloy and Graham MacKay we are happy to perform a colonoscopy if a positive test has been received from a private laboratory. We do not recommend other bowel screening kits where you test the sample yourself, as the results could be inaccurate even if you follow the instructions carefully.

Please remember that no screening test is 100% reliable. If you have symptoms of bowel cancer at any age, you should not wait for a screening invitation, but make an appointment with your GP.