Who gets Inflammatory Bowel Disease (IBD)?

Anyone can get IBD, but it is most commonly diagnosed in adolescents and young adults between the ages of 15 and 25, but it can appear at any age. (Ten percent of those afflicted develop symptoms before the age of 18.). It is estimated that IBD affects about one person in every 250 in the UK. There are around 120,000 people with ulcerative colitis and 90,000 with Crohn's disease in the UK. IBD is more common in white people than in black people or those of Asian origin. The condition is most prevalent among Jewish people of European origin. IBD affects slightly more women than men.

Approximately 20 percent of patients have another family member with IBD, and families frequently share a similar pattern of disease.

The unpredictable nature of these painful and debilitating digestive diseases create a significant burden on the community and the economy.

The exact causes of ulcerative colitis and Crohn’s disease are unclear. It is thought that several factors may play a part, such as:

What is the difference between ulcerative colitis and Crohn’s disease? 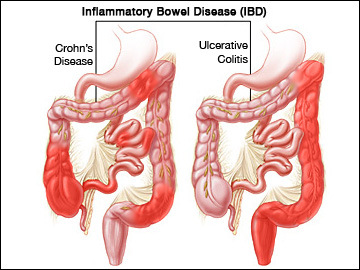 Ulcerative colitis affects only the rectum and colon and never affects the small intestine, whereas Crohn’s disease can cause inflammation anywhere along the digestive tract from the mouth, through stomach, small bowel and colon, rectum and anus.

What are the  symptoms & complications of IBD?

Ulcerative colitis involves the inner lining of the colon, while Crohn's disease involves all layers of the intestine and can occur in both the small intestine and colon. Symptoms range from mild to severe and even life-threatening, and include any or all of the following:

Crohn's disease and ulcerative colitis are unpredictable illnesses. Some patients recover after a single attack or are in remission for years. Others require frequent hospitalisations and surgery. Symptoms may vary in nature, frequency, and intensity. Without proper treatment, symptoms may worsen considerably and complications, such as abscesses, obstruction, malnutrition, and anaemia, are frequent.

Colon cancer may be a serious complication of long-term ulcerative colitis or Crohn's disease involving the whole colon, even in a patient who is in remission.

How is IBD treated? 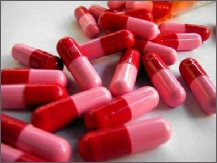 New treatments are being developed based on research of the immune system's role in the symptoms of IBD.

An estimated 20% of people with ulcerative colitis have severe symptoms that often don't respond to medication. In these cases, it may be necessary to surgically remove an inflamed section of the digestive system. Around 60-75% of people with Crohn’s disease will require surgery to repair damage to their digestive system and treat complications of the condition.

What types of surgery are performed in IBD?

Surgery is sometimes recommended when medications can no longer control symptoms, when there are intestinal obstructions, or when other complications arise. An estimated two-thirds to three-quarters of persons with Crohn's disease will have one or more operations in the course of their lifetime. However, surgery for Crohn's disease is not considered a permanent cure because the disease usually recurs. For ulcerative colitis, surgical removal of the entire colon and rectum (colectomy) is a permanent cure. Approximately 20 percent of ulcerative colitis patients have to undergo colectomy eventually. The risk of surgery for ulcerative colitis may be higher if the disease begins in childhood.

It is often possible to perform laparoscopic colorectal surgery for patients  undergoing operation for IBD. This may be associated with a faster recovery and fewer complications.

Do emotional factors play any part in IBD?

IBD is not a psychosomatic illness--there is no evidence to suggest that emotions play a causative role. Flare-ups of disease may occur, however, during times of emotional or physical stress.

Does diet have  a role in treating or causing IBD?

There is no link between eating certain kinds of foods and IBD, but dietary modifications, especially during severe flare-ups, can help reduce disease symptoms and replace lost nutrients. There is no single diet or eating plan that will work for everyone with Crohn’s disease or ulcerative colitis. Dietary recommendations must be tailored for each patient, depending on what part of the intestines is affected and what symptoms are present. There may be times when modifying a patient’s diet can be helpful, particularly during a flare.

Can I undergo investigation/treatment of IBD at the Glasgow Colorectal Centre?

Yes. Glasgow Colorectal Centre surgeons Richard Molloy and Graham MacKay have extensive experience in assessing and treating patient with Crohn’s disease and ulcerative colitis. As with many gastrointestinal diseases, a multidisciplinary approach is often best and the team works closely with medical gastroenterology and radiology colleagues to ensure best management of patients.

Where can I get more information on ulcerative colitis and Crohn’s Disease?

More detailed information on ulcerative colitis and Crohn’s disease is available on additional web-pages on the this site. Additional resources are available at the following sites.

UK  patient orientated organisation. Provides useful information for patients with Crohn’s and colitis. Organisation had local branches and is also involved in fundraising

If you have any further questions about Inflammatory Bowel Disease, Ulcerative Colitis or Crohn’s Disease, your own GP is often the best first port of call.

If appropriate, they will be able to arrange a referral to a colorectal specialist centre such as the Glasgow Colorectal Centre.

Inflammatory bowel disease (IBD) is a group of long-term conditions that cause inflammation of the gastrointestinal tract (gut). Crohn's disease & ulcerative colitis are the two commonest causes of IBD. Patients with IBD have inflammation of the intestine, leading to symptoms such as bloody diarrhoea, abdominal pain,  weight loss and other problems. Medication does not cure IBD but can suppress inflammation and keep symptoms at bay. If medical therapy fails to control the symptoms, or if certain complications occur, surgery may be required. 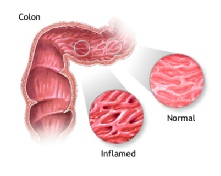 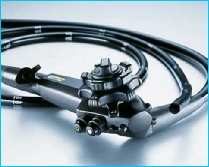